COVID-19 Update: How We Are Serving and Protecting Our Clients
Helping Injured Victims
Get Back on Their Feet
REQUEST A FREE CONSULTATION
Home
About Us
News
Knights of Columbus – 129 years of doing good works 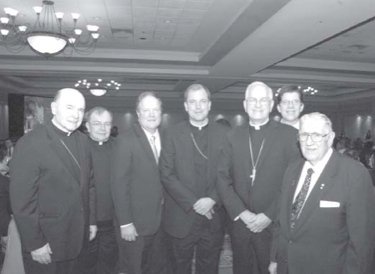 By Tami A. Quigley

The Knights of Columbus have stood steadfast in their faith in God and service to their fellow man for the past 129 years, and are an active presence in the Catholic Church, as well as a mainstay of good works in the Diocese of Allentown.

According to the Knights website, on March 29, 1882 the Connecticut state legislature officially chartered the Knights of Columbus, a fraternal benefit society founded by Father Michael McGivney with a group of parishioners in the basement of St. Mary Church, New Haven. Father McGivney’s cause for sainthood is being investigated by the Vatican.

Still true to its founding principles of charity, unity and fraternity 129 years later, the Knights has grown to the largest lay Catholic organization in the world with more than 1.7 million members.

Throughout its history, the Knights have been an effective advocate and defender of civil and religious rights for all. The organization has also contributed billions of dollars and millions of hours of volunteer service to charity.

What Can We Help You With?
Contact Us
Practice Areas
Search this site
Client Reviews
★★★★★
No improvements needed. Everyone was very friendly & helpful. Christine F.
★★★★★
I only talked to Anna she was super!! I don't see anything you can do to make it better or easier. I feel bad it took me long to pay you. I never thought I would get approved in five months. I loved what you all did for me. Sandra S.
★★★★★
The services I received were exceptional. Robyn J.
★★★★★
I don't think there is need for improvement. My cases were handled with such care and consideration I would bring any case here. Angela S.
★★★★★
Would you recommend our services to others? Yes, I was so pleased, and so thankful for everything. Any additional comments... none, you are awesome, thank you again. Jamie B.
View More
Submit a Law Firm Client Review