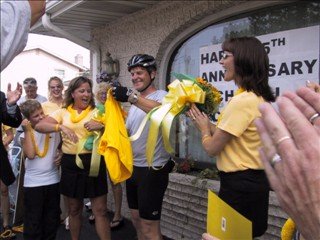 Attorney Michael J. O’Connor would like to commend WNEP’s meteorologist, Joe Snedeker, for allowing Schuylkill County to participate in “Go Joe VII”. As part of his charity bicycle route, Joe peddled into town and was greeted “Tour de Frackville” style with a police car and fire engine escort.

Frackville was Joe’s 4th stop on his 500-mile charity bike ride, which began in Seneca Rocks, West Virginia. Over the last six years, Joe has raised over one million dollars for the children of St. Joseph’s Center. Attorney O’Connor was honored when Joe asked O’Connor to host his stop in Schuylkill County. O’Connor was very touched by the community outpouring of support for Joe and the St. Joseph’s Center. Hundreds of people withstood the heat to encourage Joe on his journey with cheers and applause. In addition, the people of Frackville presented Joe with $3,700 in donations for St. Joseph’s Center.

What Can We Help You With?
Contact Us
Practice Areas
Search this site
Client Reviews
★★★★★
Valeen Hykes is very professional and an amazing asset to the firm. Her assistant Ana Lopez Vives was very professional and very helpful. She is also a great asset to the firm. Craig F.
★★★★★
No improvements needed. Everyone was very friendly & helpful. Christine F.
★★★★★
I only talked to Anna she was super!!
I don't see anything you can do to make it better or easier. I feel bad it took me long to pay you. I never thought I would get approved in five months. I loved what you all did for me. Sandra S.
★★★★★
The services I received were exceptional. Robyn J.
★★★★★
I don't think there is need for improvement. My cases were handled with such care and consideration I would bring any case here. Angela S.
★★★★★
Would you recommend our services to others?
Yes, I was so pleased, and so thankful for everything. Any additional comments... none, you are awesome, thank you again. Jamie B.
View More
Submit a Law Firm Client Review